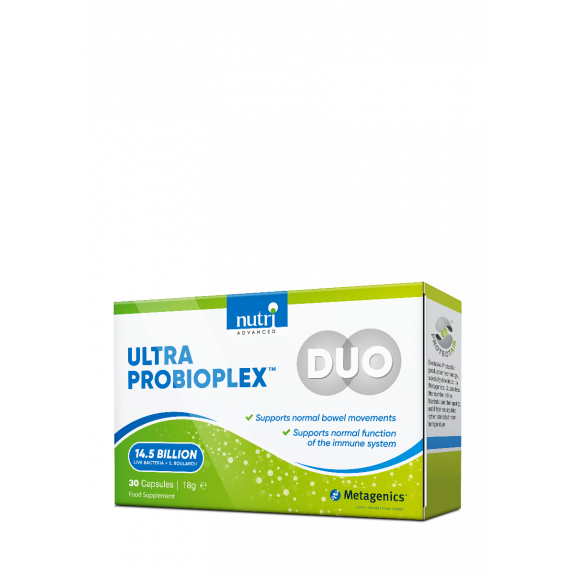 4 strains of live bacteria plus Saccharomyces boulardii, blackberry fruit extract and vitamin D - ideal for use during or post- antibiotic use to support normal bowel movements

Ultra Probioplex™ Duo is a unique duo combination of Saccharomyces boulardii and live bacteria that has superior stability. This formula contains 8.5 billion extensively researched live bacteria strains and 6 billion Saccharomyces boulardii. It is ideal for those taking antibiotics, because Saccharomyces boulardii, as a yeast, is not inhibited or killed off by antibiotics; and it helps to support a healthy balance of microflora following antibiotic use with a combination of 4 different live bacteria strains. The bacterial strains are L. acidophilus NCFM®, L. paracasei Lpc-37, B. lactis Bi-07® and Bi-04. Ultra Probioplex™ Duo also contains vitamin D which contributes to the normal function of the immune system. This formula features ProtectAir™ technology which guarantees the number of live bacteria and their quality without refrigeration until the expiry date, making it ideal for travelling.

ProtectAir™ is a triple action moisture defence system that protects the live probiotic bacteria so they can stay alive and at full strength at room temperature (30°C).

How Are Bacteria Classified?

Bacteria names include their genus, species and strains. Using the example of Lactobacillus acidophilus NCFM® the bacteria genus is Lactobacillus, the species is acidophilus and the strain is NCFM®. It is important to understand this as not all probiotics are created equal, and some strains may have little research compared to others. Therefore when choosing a live bacteria supplement you should choose one that includes strains that have been studied and can be guaranteed to survive the acidic conditions of the stomach.

What is Saccharomyces boulardii?

Saccharomyces boulardii is a non-pathogenic yeast strain isolated from the skins of tropical fruits. Each capsule of Ultra Probioplex™ Duo contains 6 billion Saccharomyces boulardii live organisms. It is resistant to antibiotics, meaning it can support gut function during antibiotic use. It also supports healthy bowel movements and is suitable for use by those who are travelling.

Why are blackberry fruit and leaf included?

Blackberries (Rubus fructicosus L.) have a long history of traditional use, where they are known to support normal bowel movements. Dark-coloured berries, such as blackberries are rich in phenolic compounds including anthocyanins and ellagitannins, which may have positive health benefits.

What's The Difference Between Time Of Expiry Vs Time Of Manufacture Guarantees?

Has Ultra Probioplex™ Duo been used in any clinical trials?

The combination of the 4 strains of live bacteria used in Ultra Probioplex™ Duo have previously been demonstrated in a double-blind, placebo-controlled study to help restore the levels of good bacteria in the gut following antibiotic use. The addition of Saccharomyces boulardii means this product is suitable for use both during and after antibiotic therapy.

1-2 capsules daily, or as directed.

For children 3 - 12 years 1 capsules a day is recommended.

Are there any side effects from taking probiotics?
You may experience a change in bowel function/habits for a few days which may present as a gurgling/wind/change in bowel frequency. This is perfectly natural with taking any probiotic and will generally settle down after a week or so. Reducing the dosage may help alleviate this.

**The exclusive ProtectAir™ production technology was specially developed by Metagenics. It guarantees the number of live bacteria and their quality until the end of the best-before date when stored at room temperature.
* NRV is the Nutrient Reference Value
✝ NRV not yet established

Suitable for adults and children from the age of 3 years - see dosages information.

It is particularly well-suited for during and after antibiotic use, or for those who are travelling.

Suitable for vegetarians and those who are dairy-free.

The vitamin D3 in this product is from lanolin – a vegetarian source of vitamin D3.