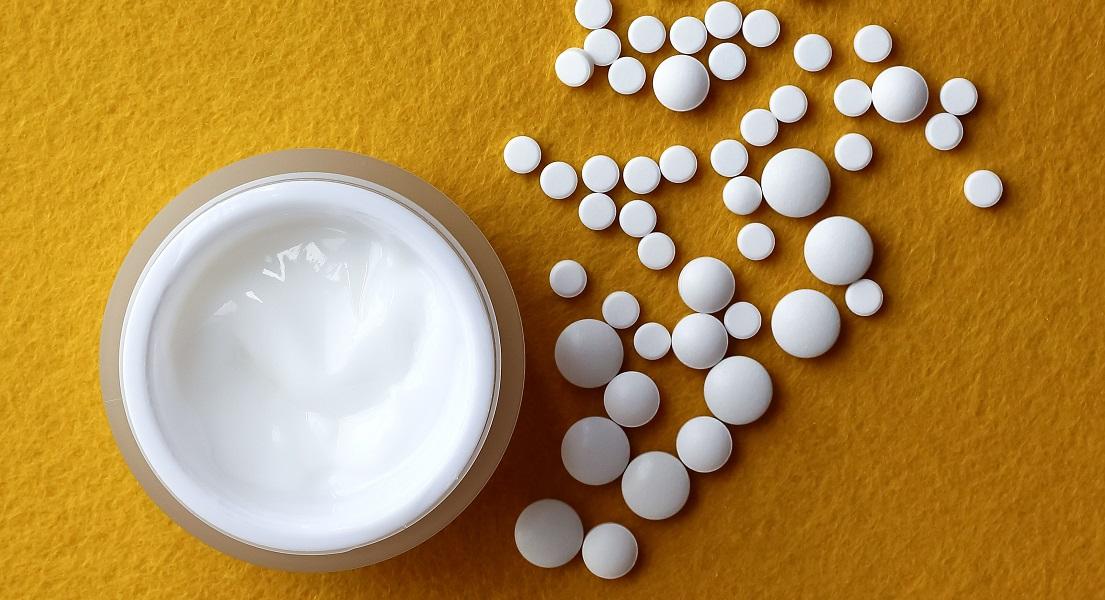 How Should You Take Antioxidants to Protect Your Skin? Face Creams vs. Vitamin Pills

According to market analyst Mintel, antioxidants are the most popular skincare ingredient ever. Skincare producers know that adding antioxidants to skin creams will dramatically boost sales, but does it actually make the product more effective? And how does this compare to the effects on your skin of taking them in supplement form instead, to achieve ‘beauty from within’?

Here we take a closer look at the latest research on skin & antioxidants, to help you select the best support for your skin.

Why are antioxidants so crucial for your skin?
There is no doubt that antioxidants are among the most important nutrients you can deliver to your skin. Your skin is under constant attack from harmful oxidative stress every day, from sources such as the sun’s UV rays, air pollution, smoking and even from natural reactions that are constantly happening inside your body. Oxidative stress is one of the biggest culprits when it comes to common signs of prematurely ageing skin such as wrinkling and sagging. It damages important structural proteins in the skin, such as collagen and elastin, cell membranes, and even your DNA – all of which are crucial for healthy skin.

Both acute and chronic UV exposures reduce levels of antioxidants in the skin and allow oxidative damage of collagen and elastin to occur.

Antioxidants are your most powerful weapons in the fight against oxidative stress. Some are naturally produced inside your body, such as superoxide dismutase (SOD), catalase and glutathione peroxidase. And other antioxidants, such as vitamin C, must come from your diet.

Oxidative stress isn’t just an issue for your skin; it affects every part of your health and can increase your risks of chronic disease. Unfortunately, the daily requirement for antioxidants is greater than the majority of people will get through diet alone. Moreover, as part of the natural ageing process, the balance shifts - oxidative stress increases and your internal antioxidant defence mechanisms decrease - resulting in accelerated skin ageing. Most people will therefore benefit from adding extra antioxidants into the diet, both through food and in supplement form, especially as you get older.

When it comes to protecting your skin against oxidative stress, we know that antioxidants are key; many skin creams contain added antioxidants such as CoQ10, rosemary, carotenoids and vitamin C, but there is an ongoing debate on whether these are best supplied topically, in supplement form or as a mix of both? Here’s what the research says:

Vitamin C
One of the most important nutrients for your skin; vitamin C is a powerful antioxidant that protects your skin against the damaging effects of oxidative stress.  It’s also an essential ingredient for collagen and elastin synthesis – two vital structural proteins in the skin1,2. Collagen is the ‘tough glue’ that holds skin together, and elastin gives skin its ‘elasticity’. Together they support healthy youthful skin.

The use of vitamin C in topical applications for at least 12 weeks has been shown to decrease wrinkling, reduce protein fibre damage, decrease apparent roughness of skin and increase collagen production. Vitamin C applied topically has also been shown to reverse age-related structural changes in the interface between the dermis and epidermis layers of the skin6-12. What’s interesting though, is that the effects of topical vitamin C are not apparent in all individuals and in one study, those with high dietary intake of vitamin C showed little or no effect of topical administration11.

Vitamin C supplements - Oral supplementation with vitamin C has been shown to effectively increase vitamin C content in the skin13, 14. Observational studies have also found higher intakes of vitamin C to be associated with better skin appearance, with notable decreases in skin wrinkling15, 16.

Our Verdict
Vitamin C has benefits for skin health, both when used topically & internally, so taking a daily supplement and getting a bit extra in your face cream is a great protocol.

Co Enzyme Q 10 (CoQ10)
CoQ10 is a fat-soluble antioxidant, found in all human cells and plays a vital role in energy production. CoQ10 content in skin decreases with ageing, exercise, whilst taking statins, and with various diseases too17-21.

CoQ10 in skin cream - In human skin, few studies exist on the topical application of CoQ10, however it is widely added to skin creams for its antioxidant effects, and no side effects have been reported to date. Idebenone is a synthetic version of CoQ10 widely used in face creams because it is reported to have stronger antioxidant activity.  In one study, idebenone showed positive effects on sun-damaged skin (reduction in dryness, fine lines and wrinkles) however contact dermatitis has been reported as a possible side effect following topical application of idebenone22,23.

CoQ10 in supplements - CoQ10 is considered to be an effective nutritional supplement that improves skin ageing, especially wrinkles. Oral administration of CoQ10 increases the skin levels of CoQ10 level, and this has both energising and antioxidant actions in skin cells. CoQ10 is clinically safe and few side effects have been reported during long-term trials in humans, even at high doses24-38.

Our Verdict
In conclusion, oral supplementation of CoQ10 is expected to be effective for "beauty from within," through its antioxidant and energising effects in skin. CoQ10 can be more confidently recommended in supplement form than topically to support skin health. Choose supplemental CoQ10 in the form of ubiquinone, as this is one of the main forms naturally used by the body.

Maritime pine bark extract (Pinus pinaster)
Maritime pine bark extract is packed full of OPCs - super nutritious antioxidant polyphenols found in many plants.  Despite their abundance in nature however, our diets tend to be relatively low in OPCs.  This is because OPCs are found in high amounts in fruit and vegetable skins, in seed cuticles and in the seeds themselves, all of which are usually discarded when preparing or eating food.  OPCs play a protective role in plants and can offer similar protective benefits to human health.  Standardised extracts of French maritime pine bark have been widely studied for a range of potential benefits, including skin health.  Reported benefits include antioxidant, anti-inflammatory, anti-melanogenic, and anti-carcinogenic39-43.

Maritime pine bark extract in skin cream - In a 2004 animal study, topical application of a standardized extract of the bark of the French maritime pine (Pinus pinaster) offered significant protection from UV-induced acute inflammation, immunosuppression and carcinogenesis. The study authors concluded that the standardized extract has the potential to provide photo-protection for humans in a complementary role with sunscreens, when applied to the skin after, rather than before, UV exposure. Additional animal studies have demonstrated skin antioxidant benefits and accelerated wound healing following topical application of standardised Maritime pine bark extract, however more research is needed to validate these results44,45.

Maritime pine bark extract supplements -Standardised Maritime pine bark extract (Pinus pinaster) has been shown to have strong antioxidant properties. It has been studied in a human clinical trial for its effects on the skin when taken in standardised supplement form; results showed that skin firmness, elasticity and fatiguability all significantly improved. After just 28 days, a reduction in the appearance of wrinkles was noticed.

In another study, which involved 21 human volunteers, oral supplementation with standardised extract of Maritime pine bark appeared to ease the negative effects of UV radiation on the skin 46,47.

Our Verdict
Maritime pine bark extract has been widely studied and has demonstrated significant anti-ageing skin benefits, when taken in a standardised supplement form. Whilst there seems to be potential for its use in topical applications, more research is needed.

Citrus & rosemary extracts
Extracts of citrus (Citrus paradisi) and rosemary (Rosmarinus officinalis) are both rich in plant polyphenols, which are known for their powerful antioxidant activity and have been found to be effective in preventing ultra violet radiation (UVR)-induced skin damage.

Plant extracts in skin cream - Plant extracts are frequently added to skin creams for topical antioxidant support. Whilst plant extracts such as citrus & rosemary have a long history of traditional use and are generally regarded as safe, there is little current research to add scientific weight to their use in formulas designed for topical use.

Our Verdict
Human studies have demonstrated significant skin benefits via supplementation with a combination of citrus and rosemary extracts. Topical use of these plant extracts is widespread, and has a long history of traditional use, however further scientific research is needed.

Astaxanthin
Astaxanthin is a potent antioxidant that belongs to the carotenoid family of compounds. It is widely and naturally found in marine organisms such as shrimps and crabs, and fish such as salmon and sea bream.

In terms of skin benefits, astaxanthin may help to prevent UV-induced collagen breakdown and photo ageing. Carotenoid levels in the skin are known to increase with oral supplementation. A number of clinical studies have evaluated either topical or oral supplementation effects, or a combination of both.

Astaxanthin in skin cream & supplements - In a recent clinical study, 30 healthy female subjects were given 6mg oral supplementation and 2ml topical application of astaxanthin per day for 8 weeks. Significant improvements were demonstrated for skin wrinkle reduction, age spot size and improved elasticity. Results of this trial suggest that a combination of oral supplementation and topical application of astaxanthin can improve the condition of skin. A second trial involved 36 healthy male subjects who took 6mg astaxanthin in supplement form for 6 weeks. Again, results showed improvements in skin condition. Additional studies have found skin benefits of supplementation with astaxanthin50-52.

Our Verdict
Research shows that both topical application and oral supplementation with astaxanthin might prevent or minimize the effects of skin damage due to sun exposure such as sagging or wrinkling.

How to protect your skin with antioxidants – summary
Your skin is highly vulnerable to damage from oxidative stress especially from the sun’s UV rays. For healthy, youthful skin, it is essential to supply it with a daily dose of antioxidants. Daily supplementation with vitamin C, CoQ10, Maritime pine bark extract, citrus & rosemary extracts and astaxanthin is recommended. In addition, topical application of a skin cream containing vitamin C is highly advisable. Other antioxidants such as CoQ10, astaxanthin, plant extracts and Maritime pine bark extract may have beneficial effects when applied topically.