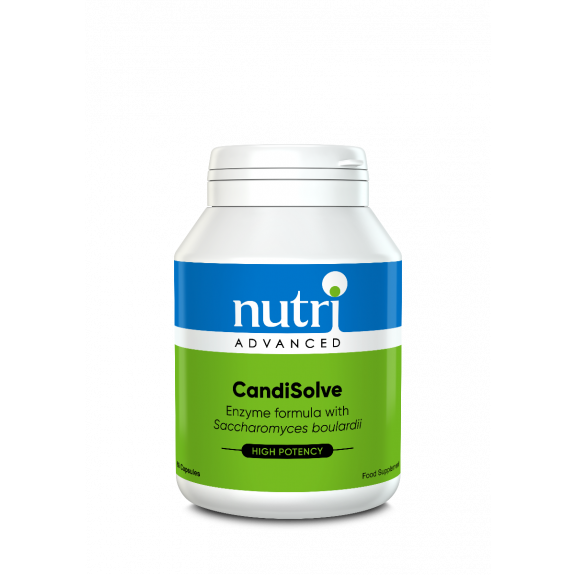 CandiSolve is a high strength enzyme formula with Saccharomyces boulardii designed to support a healthy microbial balance in the gut. In the gastrointestinal tract there should be a healthy balance of beneficial bacteria and other microbes. However this balance is easily disrupted by poor dietary and lifestyle factors. If this occurs, undesirable organisms, including pathogenic yeasts such as Candida albicans, can overgrow causing the balance to be disrupted.

CandiSolve contains the enzymes amylase, glucoamylase, cellulase, hemicellulase and protease and biologically these enzymes target glucan, mannan and chitin. Studies have shown that these substances are components found in the cell walls of pathogenic yeasts. CandiSolve also contains Saccharomyces boulardii which is a non-pathogenic yeast used to support a healthy balance of flora in the gut. This combination of enzymes and Saccharomyces boulardii helps to support the body in purging unwanted compounds from the gut and works well alongside a separate natural anti-fungal.

What is Saccharomyces boulardii?

Saccharomyces boulardii is a non-pathogenic yeast strain isolated from the skins of tropical fruits. It has been used worldwide to support intestinal health since its discovery in 1920. It is a transient yeast, meaning it does not colonise the intestinal tract but instead helps to strengthen the gut's natural defences and may also support a reduced inflammatory response. It has been shown to survive the digestive process so it reaches the gut alive and remains in a viable form throughout the bowel.

Take 2 capsules daily between meals, or as directed by your healthcare practitioner. It’s important that CandiSolve is taken on an empty stomach

Can capsule be opened and sprinkled onto food?
No

Suitable for vegetarians and vegans.

Not recommended for individuals with gastritis or ulcers. CandiSolve must not be taken by organ transplant recipients, or those who are immunocompromised.

Not recommended during pregnancy or breastfeeding. If taking any kind of medication or have a medical condition, consult a healthcare practitioner before using this product.